To be a creative genius, start acting like one!

“This week, I want you to take a piece by a composer you love and pull it apart. Get inside their head and steal a slice of their architecture. Maybe it’s the chord progression, the baseline, or motif. It’s up to you what you choose to steal, but steal you must.”

When my music theory professor spoke these words it felt like a lid on an unexplored room in my mind had been ripped off. Surely, she can’t be serious. She’s asking us to steal from Chopin, Mozart, Herr Bach? I felt like I’d been granted a permission slip from the gods.

“What if my favorite composer is Robert Plant from Led Zeppelin?” cracked the self-taught guitarist.

In her distinctive voice that suddenly sounded like a ripoff from Julia Child, she cheerily repeated, “It’s your choice – Plant, Coltrane, Freddie Mercury, Copeland. Be sure to choose your genius wisely, though. Come back next week with a composition your steal has inspired.” As she walked out the door she exclaimed, “And no plagiarizing!”

We all sat at our pianos blinking at each other.

Seeming to read our minds, we heard her voice ring through the hallway, “Dance on the maestros’ eardrums!”

Choose your genius wisely? Dance on his eardrums?

I don’t remember which composition I decided to deconstruct, but the lessons I learned in Ms. Anderson’s theory class have reverberated in my work as a designer, animator, and photographer for a very long time. I stole her voice, repeating it many times over. Sometimes with and without credit, and certainly without apology.

Don’t believe me? Here are some fascinating bread crumbs to chew on:

“Immature poets imitate; mature poets steal; bad poets deface what they take, and good poets make it into something better, or at least something different. The good poet welds his theft into a whole of feeling which is unique, utterly different than that from which it is torn.”
– T.S. Eliot

Hungry, thieving BEARS! I’m stealing from ALL OF THEM!

What I find particularly notable is there isn’t a single attribution (or concrete examples) amongst the lot of them. And let’s face it, Steve Jobs made a huge improvement over Picasso by exchanging the comma for an innovative semicolon.**

Bilbo better get a lawyer, and a damn good one.

Except… our copyright laws don’t protect ideas or their musical counterpart, chord progressions. Ironically, much later on Robert Plant and Jimmy Page, were accused of stealing the introductory chord progression for their remarkable song, Stairway to Heaven, which defined an entire generation. Thankfully and unremarkably, the courts ruled in Led Zeppelin’s favor.

For a taste of quintessential stealing, listen to the maestro, Leonard Bernstein himself talk about stealing Voltaire’s little novella for his opera, Candide, the name of which was also stolen.

When an idea rings true it gets feasted upon. Once digested, it’s becomes a part of your creative DNA. The idea spreads after the fertilization is done. Stealing an idea and pushing it through your own process is an act of homage. If someone swipes my unique “take” on the topic of artistic stealing, go ahead! And please let me know because it must be a good one!

Back when I was earning my BFA, I took a handful of art and design history courses Unsurprisingly, the curriculums were filled with ideas that took shape as distinctive aesthetic movements, none of which were the brainchild of just one god-like marble-shitting prima donna. (Full disclosure: I kind of stole the marble-shitting line from Mozart in the movie, Amadeus.)

Cubism didn’t spring fully formed like the goddess Athena from Picasso’s head. What a ridiculous notion! Only an egomaniac would steal it.

In fact, Cubism sprang from an astonishing relationship which developed between Picasso and Georges Braque. 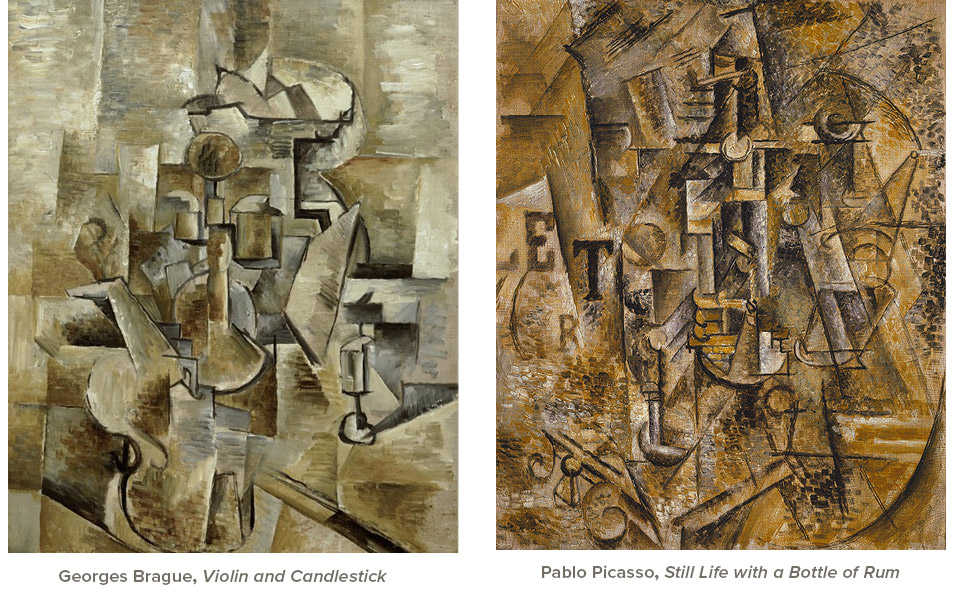 “As Braque recalled, ’We were like mountain-climbers roped together.‘ The two artists worked so closely together that their works from this period are sometimes difficult to tell apart.

Picasso and Braque forged a relationship that was part intimate friendship, part rivalry, and part two-man excursion into the unknown. The two artists were constantly in each other’s studio, scrutinizing each other’s work while challenging, motivating, and encouraging each other. Picasso said, ‘Almost every evening, either I went to Braque’s studio or Braque came to mine. Each of us had to see what the other had done during the day.’  Through this artistic collaboration, Picasso and Braque invented Cubism.”

Is there anyone out there whose work you have to see? When was the last time you invented something that was 100% your own, in its entirety?

And let’s not forget The King of the Steal: Elvis. 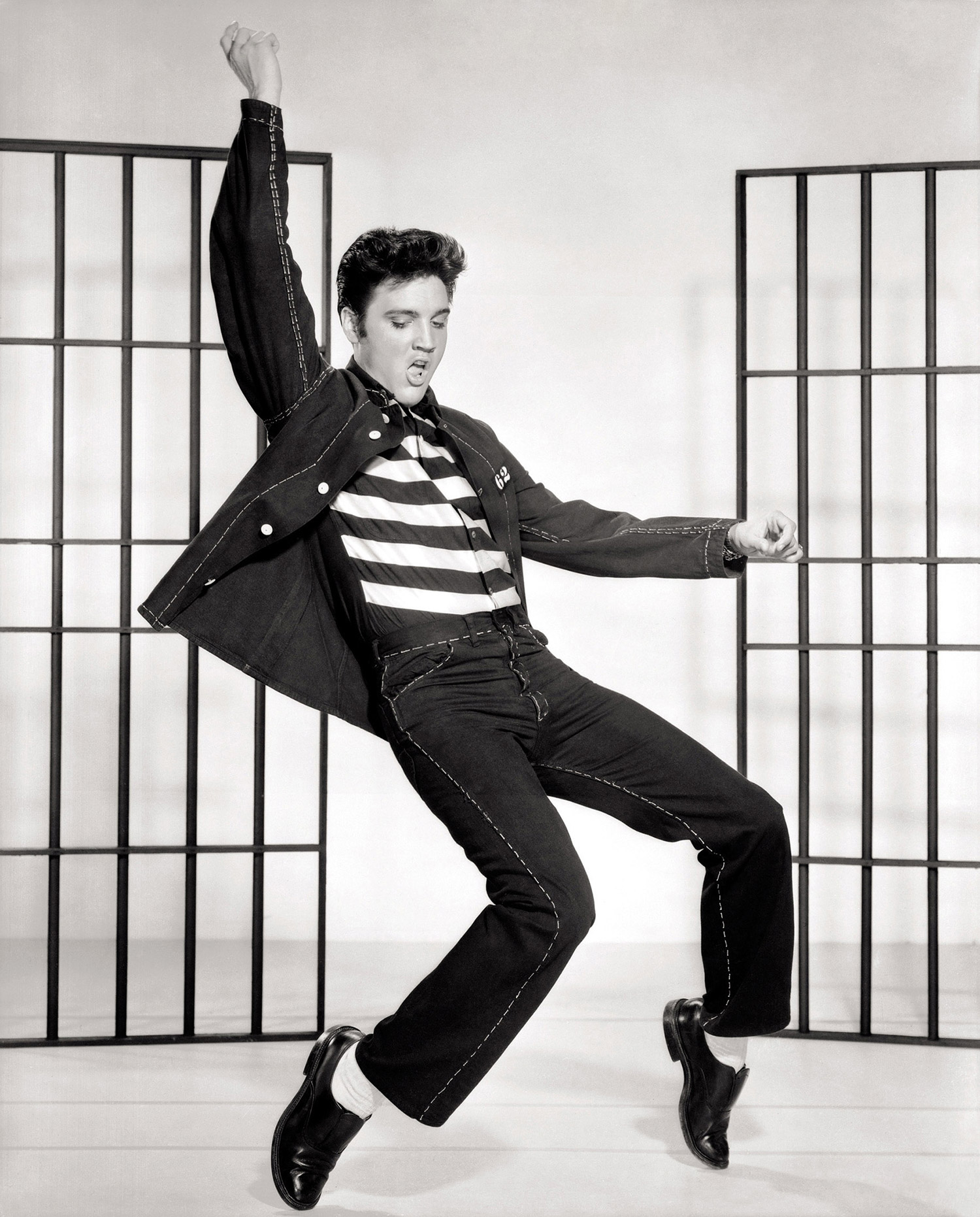 Without stealing from Elvis, would the sexy moves of James Brown, Michael Jackson or Prince ever have happened? I think not.

From a graphic design perspective, without cave paintings, hieroglyphics, tattoos, and billboards, this website? Impossible.

Like the long lineage of meditation masters extending 2600 years back from the time of the Buddha all the way up to our present-day Dalai Lama, every “original” idea has a lineage of thieves standing behind it. The Buddha’s teachings would be lost without the generous steals and refinements of the masters who have paid it forward. Why not be one of them? Take T.S. Eliot’s words to heart by tearing a page from someone’s mental manuscript and make the idea your own by improving upon it.

Take a look at any idea you think is original and it starts to disintegrate under close inspection. The words you’re reading now are the result of a massive family tree containing countless conceptual theft “victims.” To whom shall I give credit? The parade of stealers listed above? Every philosopher who ever was? Or that one pontificating boyfriend in the back seat of the pickup truck? The list goes on and on, and on and on, and on….)

How about Eve!? For now on, let’s credit the mother of the very first innovative idea. And while we’re at it, let’s slap an IP lawsuit on that hippie innovator, Johnny Appleseed.

– Seth Godin (A favorite thief I steal from)

We all get richer because the more attention, iteration, and scrutiny an idea is pockmarked and polished with, the better it becomes. And if the idea sucks, FANTASTIC! Let’s all agree to drop it and move on.

In a world overflowing with what seems like unsolvable problems, we best be digging into the architecture of the best minds on the planet, swiping their motifs and chord progressions to push OUR GENIUS forward. And, HOW DARE YOU NOT use all the resources available to you in your own projects? Especially if you’re here to bend the arc of humanity toward truth, beauty, and justice.

How about you? Who have you stolen from lately? Who should you be stealing from? In what ways could you be paying your own ideas forward? What ideas of your own would you like us to pick up and riff upon? Shoot me an email or scroll down a bit and leave a comment.

*Oh my! Steve Jobs. He treated his family and the people around him poorly, which is not something I intend to steal or applaud. He was a notorious stealer of ideas, but wasn’t so great at paying his ideas forward. He also singlehandedly trounced the Flash design community on false pretenses – a community I was a part of. I include him here because of his wide appeal and undeniable place in history as an innovative genius. Great ideas must be shared for society to flourish, which is why patents are so wonderful. Remember, ideas aren’t copyrightable or patentable.

** Ms. Anderson would have given Steve an “F” for blatant copying.